On October 8, 2019, with the Market Opening Bell of the HKEX ringing, FriendTimes Inc., the leading Chinese mobile game developer, publisher and operator, was successfully listed on the Main Board of the HKEX (Symbol: 06820.HK). 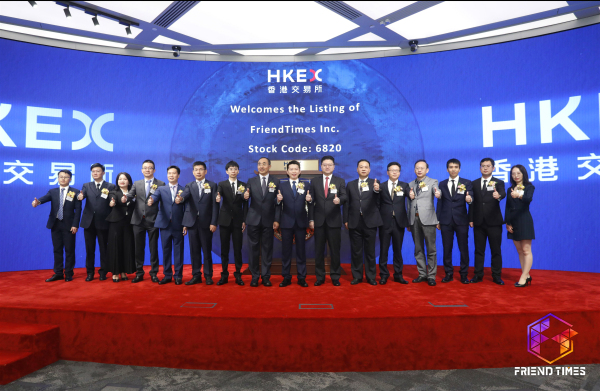 At 09:30, the founder, Chairman of the Board and CEO of FriendTimes, Mr. Xiaohuang Jiang, rang the bell signaling the opening of the HK stock market. This historical moment of FriendTimes marks the milestone of its endeavor to become a global enterprise. FriendTimes has opened its door to the public with an IPO of 330 million shares at 1.52 HKD (10% HKEX and 90% Global). As a gesture of good will, FriendTimes kindly offered the HKEX a delicate porcelain painting, suggesting all the good things to come in the future. 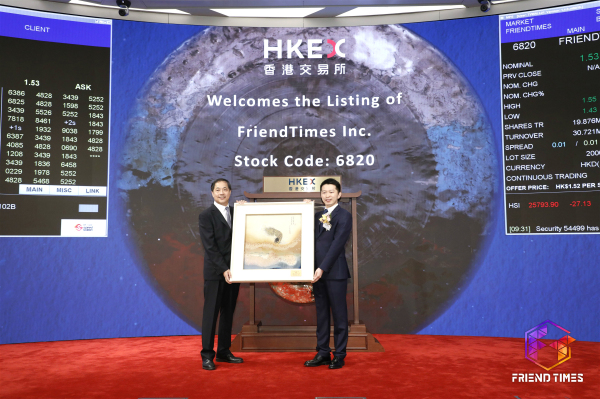 Strengthen the Ability to Profit, Expand the Market to the World

From 2016 to 2018, the annual revenues of FriendTimes were 569 million, 700 million and 1.46 billion RMB with a compound annual growth rate of 60.5%. The annual profits were 80.7 million, 118 million and 337 million RMB with a compound annual growth rate of 104.3%. By July 31st, 2019, FriendTimes has attracted 99.5 million users. The all-time-favorite Legend of Empress, Royal Chaos and Rise of Queendom keep generating revenues. The brand new Yokai Kitchen and Fate of the Empress of 2019 have also been added to the mixture, plus 5 up-coming new games, 16 different language versions of the existing games and 5 H5 mini games. The FriendTimes lineup is getting strong by the day.

Meanwhile, FriendTimes is also creating a buzz in the global market. By March, 2019, the revenue ratio of the overseas market has increased from 18.9% to 25.8%. The compound growth rate from 2016 to 2018 reached 61.5%. Currently the FriendTimes games are available in the entire greater China region, Korea, Japan, Southeast Asia and North America. German, French and Arabic version are currently underway to attract more overseas users.

2. Breakthrough in R&D and Market Expansion

Great R&D capability, proven abilities of data analysis and application ensured the excellent performance of FriendTimes. FriendTimes has won the market approval by deciphering the preferences and aesthetics of the female players and creating fascinating stories. While the existing games are still going strong, FriendTimes has begun moving into other sectors of the game market with the breakthrough in the 3D technology. With the crown jewel Yokai Kitchen this year, FriendTimes has officially entered the anime game market, creating a fan base of premium users in a very short time and generating a sizable amount of revenue. The other featured game this year Fate of the Empress has also attracted a lot of attention during several rounds of testing.

With a diversified product lineup, FriendTimes is solidifying its position in the female-oriented game market as well as tapping into other sectors of the mobile game market. FriendTimes has paved its way for the future.

In response to the national calling of promoting the innovation of literature and art, FriendTimes has adopted the ideology of “Innovation, Coordination, Green, Open and Sharing”. FriendTimes keeps enriching its own cultural connotations. With the games as carriers, FriendTimes is dedicated to influencing the next generation with the traditional Chinese culture.

3. Powerful Financial Support and A Firm Footing in Global Market

The listing of FriendTimes on the HKEX marks the company’s elevation to the global financial market and a brand new chapter in its development history. The listing will not only bring strong financial backing to the R&D and operation, but also handsome returns for shareholders and investors. FriendTimes will allocate 30% of the funds raised to game development and core technology platform, 35% to promotions and strengthening the company’s position in the overseas market, 15% to strength the intellectual property combination, 10% to strategic acquisition of related services, and the remaining 10% to operation and general usage.

FriendTimes will strengthen its abilities of product R&D, marketing and promotion, expand the overseas market, extend the life-time of the products, explore the commercial value of original IPs, and establish a development system of an entire industry chain. In the future, FriendTimes will define the new era of the game industry with its strength, firm determination and swift actions. FriendTimes will take on the responsibilities of cultural inheritance, cultural communication, cultural creation and cultural industry development. It will lead a way that reflects the culture of the Internet age and show the world the capability and confidence of the Internet technology giant that is China.